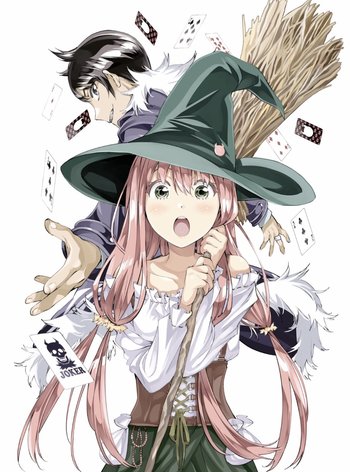 In 2021, Harry Makito, Teen Genius magician, was holding a one time only retirement show in Tokyo when he burned to death in an unexpected accident... or so one would think. But he lived, finding himself reincarnated 400 years earlier in Medieval Europe during the age of the Witch Trials! Now he fights against the church which unjustly brands women as witches with his tricks disguised as miracles. It's like real magic!

Tricks Dedicated To Witches (魔女に捧げるトリック; Majō ni Sasageru Trick) is a manga series by Shizumu Watanabe that premiered in Weekly Shōnen Magazine in August 2020. Although it appeared that the series had a successful start, with praise towards its unique premise, only 31 chapters were made when the series was cancelled in April 2021. Regretful that the story had not been finished, Watanabe hopes that one day he can return and continue it.

For my next trope, I will need a Witch!