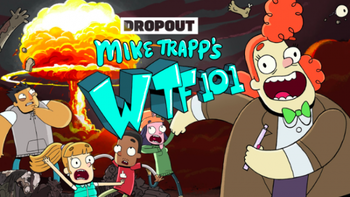 Hey kids! Remember, everything you're about to learn is reeeeeeaaal!!!! note Left to Right: Brad, Mindy, Jason, River and Prof. Foxtrot.
Look at all the wonders...
that a single class can find!
They decide to shut their mouths,
and open up their minds!
Sex, and shit, and crime and pain...
all this crap will be explained.
And while we're at it, let's try to have some fuuuunnn!
Talking about W.T.F. 101!
— Excerpt from the Expository Theme Tune.
Advertisement:

Described as "The Magic School Bus for adults", the series centers on a fateful detention session at Dunning-Kruger High School. Four teens serving their time are unexpectedly chaperoned by the eccentric Prof. Whitney Foxtrot.