Art / Girl with a Pearl Earring 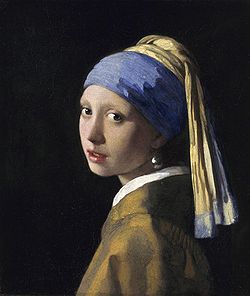 The painting Girl with a Pearl Earring (Dutch: Het Meisje met de Parel) is one of Dutch painter Johannes Vermeer's masterworks and as the name implies, uses a pearl earring for a focal point. The painting is in The Mauritshuis museum in The Hague. It is sometimes referred to as "The Dutch Mona Lisa". Created in 1665, it is one of a handful of Vermeer's works that have survived. In 1994, it underwent a restoration, which brought out many subtle colors and overtones. Vermeer was known to use expensive pigments in his paintings, and ultimately died in debt.

The painting has been subject to many Shout-Outs, including novels, an opera and even Total Drama World Tour.

Tropes Attached to This Painting: