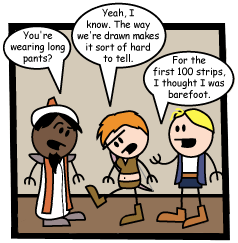 Your level of detail may vary.
Advertisement:

Need to make a webcomic, but have trouble transforming your scribbles into recognizable figures? No problem! Stick figures are easy, simple, and will get your point across without the pressures of drawing "real" art to a deadline. Used as a stopgap in some Webcomics whenever the artist doesn't have the time/energy to draw his or her normal characters.

Doing this as an "off-art" day in a normal comic is acceptable, though do it too much and you may annoy your fanbase, who came expecting better of you.

Choosing to do this full-time means that the plot, characterization, and/or jokes have to stand up on their own two line-drawn feet. If your writing is not up to scratch, you'll sink into the murky, stagnant waters of the Internet to join the rest of the ignored. Of course, if it is, you'll reach Geek Nirvana.

More profoundly, a stick figure, with its lack of definite appearance, age or even gender (though stick women are typically equipped with Tertiary Sexual Characteristics), is the ultimate Everyman: every audience member can project themselves into them.

The main example for the modern-day manifestation of these is Matt Feazel's Cynicalman, in the late '80s and early '90s. Feazel was an accomplished artist, but he drew Cynicalman as a stick-figure comic (admittedly with full perspective, shadows, etc.) to get across the idea that anyone could do this. Any xkcd fan who sees Cynicalman, their jaw will drop.