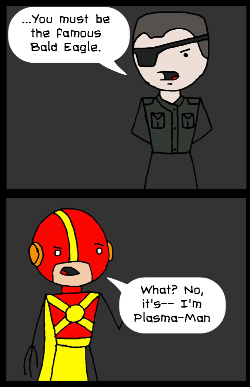 The Incredible and Awe Inspiring Serial Adventures of the Amazing Plasma-Man was a twice-weekly webcomic which began in 2010. It followed the adventures of the superhero Plasma-Man and his allies and enemies. The comic stopped updating in December 2013 and it's domain went offline around five years later. An incomplete archive can be found here