Webcomic / Hyperbole and a Half 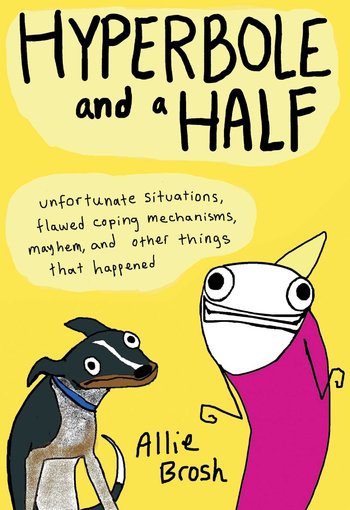 "Hi. I'm Allie.
If I had to explain myself in six words, those words would be "heroic, caring, alert and flammable." That's only four words. Oh well, I guess I should have thought of that before I started writing. Too late now.
Here, I drew you a picture of a unicorn."
Advertisement:

Hyperbole and a Half

is a hybrid blog/Journal Comic by Allie Brosh. The journal and its attendant comics detail the life—past and present—of its writer, in a surreal, sketchy style. The humor is random, the stories even more so, and the comics, sketchy as they are, somehow have a distinct appeal.

Or click the link above. Either works. Also see the wiki here.

Allie also created a forum where her readers could gather, though it has spun off into its own community only tangentially related, you can find it here

Brosh also released a book in 2013

, entitled Hyperbole and a Half: Unfortunate Situations, Flawed Coping Mechanisms, Mayhem, and Other Things That Happened. A sequel, Solutions and Other Problems, released September 2020.

The blog went on hiatus starting late 2013, though in 2015 Allie appeared on an episode of the YouTube Geek & Sundry series Spellslingers, where she showed her geek cred by coming within just a few HP of defeating host Sean Plott in a game of Magic: The Gathering. The hiatus was broken on September 2020, when she announced that she had completed her second book

and that it was available for sale. It remains to be seen if more, regular entries will follow.