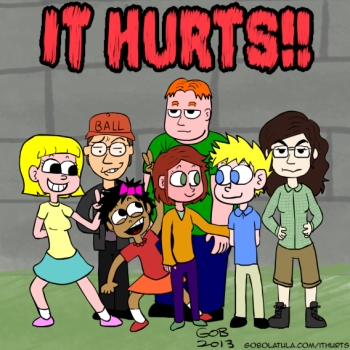 From left to right, back to front: Mark, Tubsy, Christie, Allison Schwartz, Aurora Boreanaz, Pasqualo Trianglini, and Katie Tehrani
Allison: I don't hope you shit out all your blood and die from shitting!!
Pasqualo: I don't hope you mistake a hand grenade for your tampon!!
— Strip 86: One More Time!
Advertisement:

is a webcomic by Gobolatula, who says it is "...about a silly boy riddled with depression and anxiety named Pasqualo Trianglini and how he finds his first love, a mysterious yet super kind girl named Aurora. Pasqualo also has lots of friends, including his best friend Allison who's a dirty little munchkin and Tubsy who's a chilled out big fat dude. Over time, strange and crazy things start happening and before you know it, the whole world changes."

It can best be described as a Surreal Humor Slice of Life story that contains dialogue often bordering on the completely obscene and ridiculous. It's also pretty lengthy, clocking in at over 450 pages, and as the description implies, changes a lot over the course of its run (which you might've guessed by looking at the trope list). Consider it a version of El Goonish Shive but with more profanity and less supernatural stuff occurring. At least, at first.