Webcomic / Hang in There, Kogasa-san 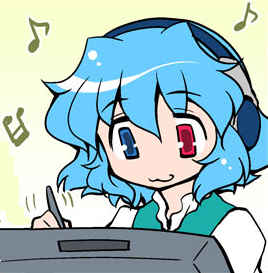 "Ohhh? I may exaggerate, but I don't draw anything false, do I?"
— Kogasa, when Yamame complained one of his earlier strips tarnished her reputation
Advertisement:

Hang in There, Kogasa-San is a Touhou Project Fan Webcomic story by Mizuki Hitoshi which tells comedically exaggerated stories from his own life and experiences traveling, attending conventions and Dojinshi festivals, and married life in general. The series' main conceit is that Hitoshi uses characters from Touhou (and rarely other anime and manga) as stand-ins for the people in his life, with Kogasa Tatara as Mizuki himself and Sanae Kochiya as his wife.

It is published (mostly) daily on Pixiv, and an English-translated and regularly updated version can be found here