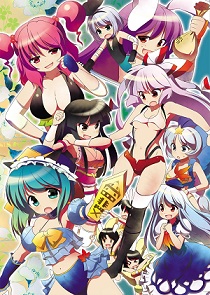 Tag Dream is a Touhou 4koma series on Danbooru and Pixiv based heavily on Kinnikuman, and thus is centered around a tag wrestling tournament. It is one of the longest running Touhou 4komas ever, with currently just over a thousand strips.

One day Yukari reads the wrestling manga Kinnikuman and is inspired to host a tag-wrestling tournament of her own. As news of the exciting new event spreads, alliances are quickly formed as the denizens of Gensokyo gather to brawl, be it for riches, glory, and excitement, or out of sheer boredom. The ring is manipulated by Yukari to disable powers and danmaku, the bread and butter of Gensokyo's combat. In a new battlefield with an unfamiliar battle style, which team shall be the last standing?

Despite being based on tag-wrestling, the 4koma is very accessible to non-wrestling fans due to its huge doses of comedy and Fanservice. in fact, a good portion of the strips are Slice of Life. True to Touhou fashion, almost all characters are quite sociable or at least non-hostile outside of the ring, and the long interludes between tournament rounds focus on the wacky hi-jinx the cast has going on.

Can be accessed on Danbooru

(translated to English) or Pixiv

The series, in addition to the usual Touhou tropes, contains examples of: