Webcomic / Halo: A Fistful of Arrows 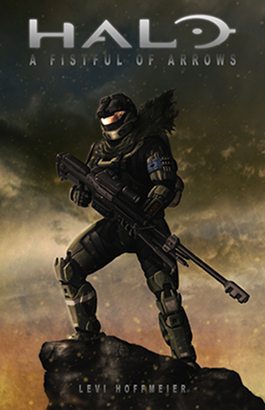 "Oh, and before you close your browser and fire up some weekend Halo, head over to HBO and check out A Fistful of Arrows. It's incredible."
— Eric "Urk" Osborne, Community Manager of Bungie
Advertisement:

Halo: A Fistful of Arrows is a Halo Fan Webcomic written by the comic and concept artist Levi Hoffmeier, commonly known as Leviathan, also the author of A Sangheili's War is Never Over and Mayflower. It takes place after the events of Halo: Reach, and revolves around the story of NOBLE Team's loyal sniper Jun and what happens to him between the events of the game and Halo: First Strike.

It's August 30th 2552, the Fall of Reach, and Jun and Dr. Halsey are fleeing the battle on their Pelican. Halsey intends to return to CASTLE Base, her nigh-impenetrable fortress beneath Reach's Menachite Mountain. However, she is still frosty toward Jun, aware that he is a Spartan not from her original program, while Jun himself is struggling with his failures in past missions, coupled with his current one to keep Halsey safe. Various flashbacks, including one extracted video feed by Halsey's AI (and "older sister" to Cortana) Kalmiya, shed light on the past of Jun, particularly regarding one difficult op to capture an Insurrectionist leader, and how when the weight fell on Jun to save the mission, he stumbled...

Oh yes, and the Covenant's invading. It's a great time to be under pressure.

The comic is an independent work, but features beautiful images rivaling Halo's own concept art. It's received a lot attention among the Halo community, especially at Halo.Bungie.Org and even from Bungie itself. While there's no official word yet from 343 Industries, A Fistful of Arrows is probably the highest requested work from the Halo fans to be promoted to Ascended Fanon.

, at Leviathan.Bungie.Org, and formerly here

, at DeviantArt (the comic along with the rest of the account has since been deleted).