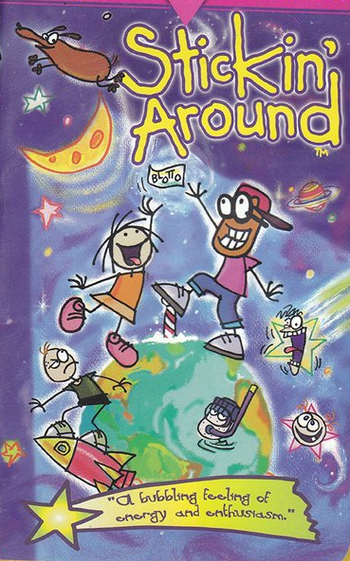 All you have to do is stick around!
For your big fat information
This is our imagination
Me and my friend Bradley
What we draw is what you see
—Theme song
Advertisement:

Stickin' Around is a Canadian children's animated series from Nelvana about a 8-year-old girl named Stacy Stickler and her best friend Bradley. The two kids live adventures through their hyperactive imaginations taking them wherever they might. Their weird and whimsical exploits are really just their way of confronting the various everyday life scenarios that come their way, from dealing with local bullies to putting up with the demands of grown-ups to just playing games with their friends.

Described by the creators as basically being what would happen if kids were allowed to create their own cartoons, Stickin' Around is told entirely from the viewpoint of its young and wildly creative protagonists, whose imaginative and fantastical approaches to navigating the problems that all kids face every day reflect the show's quirky and playful storytelling. More obvious is how the show is intentionally drawn crudely to simulate a young child's drawing, and the results actually look very convincing, with all the childlike whimsy that accompanies such art.

The series started life as a series of one-minute interstitials that aired between longer series on CBS' Saturday Morning Cartoon block in 1994, but was developed into a full series in 1996 that debuted on YTV and ran for 3 seasons of 39 episodes. A favorite of many Canadian children (and American ones, as this show had a brief, but memorable run on Fox Kids at the same time) during The '90s, the show is generally seen as one of YTV's best original animated series, becoming an iconic part of their lineup during its time on air and still carrying nostalgic value for many today.

Fun fact: This was the very first show by Nelvana to be animated primarily using computers.

From 2016 to 2020, the show aired in the United States on Qubo. It is also available in its entirety on Retro Rerun

Dill: HEY, YOU GUYS!! THERE'S INDEX PAGES THAT TAKE YOU TO ALL SORTS OF PLACES ON THIS WIKI, YOU KNOW!!