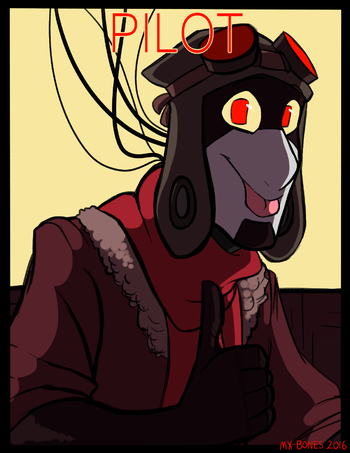 "I was pushed. I didn't fall. I flew."
Advertisement:

Pilot is a webcomic made by artist Mx Bones. The idea for Pilot was first had several years ago, but it was shelved. After their Five Nights at Freddy's AU shut down, Bones brought Pilot back with reworked versions of the AU's characters.

The comic takes place in the year 2025, and stars the titular Pilot, a robot who was created by a man named Danish to fly planes. Having been built with whatever scrap parts Danish had lying around, Pilot isn't the smartest robot, and often gets into trouble with his close friends and Danish's adopted kids, Apollo, Bhanuja, and Cherry.

But it isn't all fun and games. The world of Pilot is a dark one indeed. The OB Mafia, an evil group of terrorist robots, seek to cause mayhem and destruction. Their cruel deeds have caused many people to now distrust robots by default.

Pilot can be read on Tumblr here.

Tropes are ready for takeoff!