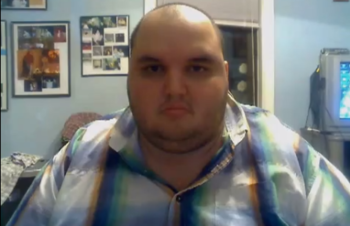 Even with this 350p image, he still won't fit.
This is my description...

Pissed Off Angry Gamer is a video game reviewer from Russia. In his reviews, he talks about bad games and consoles, or at least ones that he didn't like. His reviewing style is very similar to The Angry Video Game Nerd's, full of profanity, especially the word "shit".

His original YouTube channel was shut down, but his videos were archived.

And these, right here, are my examples...

And these... are what I call my shitdexes. And the reason I call them shitdexes? BECAUSE THEY'RE A PIECE OF FUCKING SHIT!