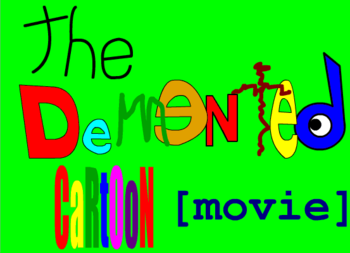 It is Exactly What It Says on the Tin.

It features a trailernote with everything missing!, opening credits, stick figuresnote Blah! *boom*, green and blue chairs, Qrrbrbirlbel, a kamikaze watermelonnote DA-DA-DA-DA, Da-DAAAAA! Wheeeeee! *splat*, a production of Romeo and Julietnote Bring out the Auto Romeo Maker!, a tidal wavenote Splash., nucularnote It's pronounced "nuclear!" explosions, a rocket to Marsnote You fast-forwarded wrong!, a car race, a superhero, a villain and an ending, among other things. If you have thirty minutes of your life to waste, you ought to check it out.

A production of Romeo and Juliet goes wrong.

A production of Romeo and Juliet goes wrong.