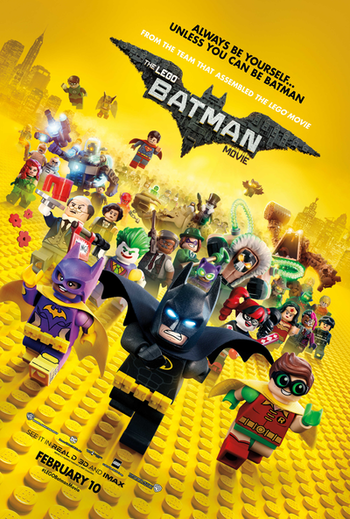 If you want to make the world a better place, take a look at yourself and make a change. Hooo.
Batman: Are you ready to follow Batman, and maybe learn a few life lessons along the way?
Robin: I sure am, but first, where's the seatbelt?
Batman: The first lesson is: life doesn't give you seatbelts!
Advertisement:

The LEGO Batman Movie is a 2017 animated comedy and Spin-Off of The LEGO Movie, that focuses on the trials and tribulations of one of the secondary characters from that film: Batman.

After saving the city yet again Batman returns to the quiet solitude of his life. But little does he realize he'll soon face his greatest threat: Not the Joker trying to destroy the city but rather the prospect of letting others into his life... whether he wants them there or not.