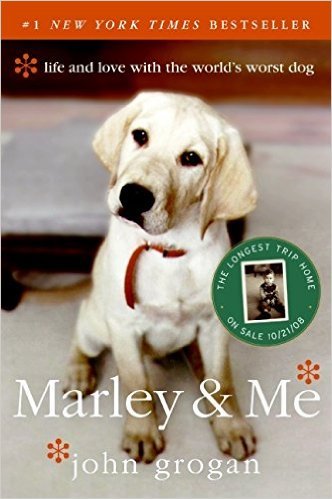 A dog has no use for fancy cars or big homes or designer clothes. Status symbols mean nothing to him. A waterlogged stick will do just fine. A dog judges others not by their color or creed or class but by who they are inside. A dog doesn't care if you are rich or poor, educated or illiterate, clever or dull. Give him your heart and he will give you his. It was really quite simple, and yet we humans, so much wiser and more sophisticated, have always had trouble figuring out what really counts and what does not.
— John Grogan
Advertisement:

The story of newspaper columnist John Grogan, his wife and children and their manic Labrador Retriever Marley, the 2005 book became an unexpected success particularly amongst pet owners. It was made into The Film of the Book in 2008, directed by David Frankel, with Owen Wilson and Jennifer Aniston as the protagonists.

Got a Direct to Video sequel, Marley & Me: The Puppy Years (2011) with Marley Suddenly Speaking.

Marley & Me provides examples of:

Alternative Title(s): Marley And Me