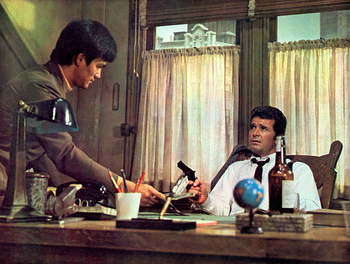 Marlowe is a 1969 neo-noir mystery film directed by Paul Bogart. It is based on the Philip Marlowe novel The Little Sister by Raymond Chandler.

Philip Marlowe (James Garner) is engaged by the exotically named Orfamay Quest (Sharon Farrell) to find her brother, Orrin, who has been missing for some time and whom she believes to be in trouble. Marlowe soon finds a hoodlum associate of Orrin's, Grant Hicks (Jackie Coogan). Hicks is then murdered, and Marlowe, who finds him dead in a flophouse hotel, discovers photos of one Mavis Wald (Gayle Hunnicutt)—a well-known television actress—in compromising positions with mob boss Sonny Steelgrave (H.M. Wynant). With occasional assistance from Mavis's friend Dolores (Rita Moreno), a stripper, Marlowe sets out to find Orrin's whereabouts and solve the murders.

Bruce Lee, in the first film of his too-short movie career, has two scenes as Winslow Wong, a badass martial artist (of course) sent by Steelgrave to intimidate Marlowe. William Daniels appears as Mavis's agent.