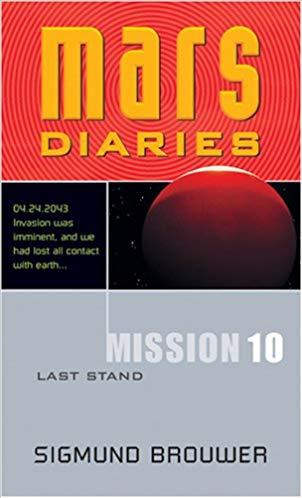 The Mars Diaries series, written by Sigmund Brouwer, is a science-fiction series centered on a 14-year-old named Tyce Sanders, who lives on a base in Mars specially designed to allow scientists to conduct experiments in preparation for a potential human colony on Mars. His mom works on base as a scientist, while his dad pilots one of the transport vehicles between Mars and Earth.

But Tyce learns that he has a special ability. Due to an experimental surgery (that unfortunately left him wheelchair-bound), he can remotely control a robot, using his brain as the controls, allowing him to venture out into Mars in the way others can't. Unfortunately, the close connection between his brain and the robot can cause trouble when the robot is damaged.

Also along for the adventure are his close friend Rawling McTigre, a medical doctor living at the dome, and Ashley Jordan, a newcomer to the dome that happens to be the same age as him (and as it turns out, shares the ability to control robots). Flip and Flop, two (illegally) genetically engineered koalas, also make several appearances in the series after Book 2.

As the series develops, the Terratakers, a group attempting to utilize the robot projects for purposes deemed immoral by society (such as child soldiers), threaten the safety of the base and of humankind in general. Tyce eventually must work with allies to liberate the other children in the project and prevent the Terratakers from taking over.

And did we mention that this is a Christian book series? While not Anvilicious, elements of the Christian faith are interspersed throughout the novels, including an Author Filibuster at the end that discusses a topic, in most cases adopting the stance that religion and science are not mutually exclusive, and that in many cases the two intersect.

Books 1-5 take place on Mars, while books 6-10 detail a journey made by Tyce and Ashley to Earth and back in order to help the other kids involved in the project.