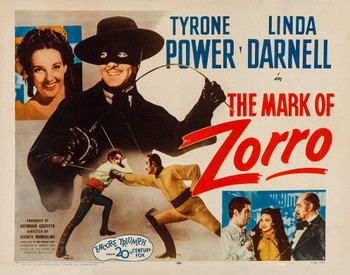 The Mark of Zorro is a 1940 film directed by Rouben Mamoulian based on the character of Zorro. It is a remake of the 1920 Silent Movie The Mark of Zorro that starred Douglas Fairbanks. Alfred Newman composed the music.

Spanish California, late 18th-early 19th century. Don Diego Vega (Tyrone Power) is the son of Don Alejandro, the alcalde (basically a provincial administrator) of a sleepy town called Los Angeles. Diego, who is studying at a military academy back in Spain, comes home to find that his father has been deposed as alcalde. The new alcalde, Luis Quintero, is a corrupt stooge who is victimizing the people with oppressively high taxes which he is using to line his own pockets. In this he is assisted by by his sinister military chief, the murderous Captain Pasquale (Basil Rathbone), the real power behind the throne, who does stuff like cut out the tongues of peasants who talk back.

Alejandro appeals to his son for help in fighting against Quintero and Pasquale. But rather than oppose them openly, Diego elects to act like a foppish Idle Rich twit. Having convinced Quintero and Pasquale that he is no threat, he assumes the secret identity of Señor Zorro ("Mr. Fox"), a masked swordsman who fights for the peasants and against the oppressors. Meanwhile, there is the problem of Quintero's gorgeous niece Lolita (Linda Darnell), who is drawn to Zorro the dashing cavalier.

The Mark of Zorro provides examples of: