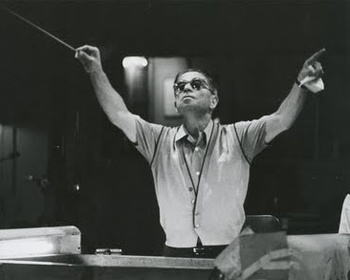 Alfred Newman (March 17, 1900 – February 17, 1970) is the head of a musical dynasty (his younger brothers, Emil and Lionel, were both composers, as are his sons David and Thomas and his nephew Randy) and one of the most important and influential composers ever to wield a baton in Hollywood. His important legacy to the film music industry is almost incalculable.

The eldest of ten children born to Russian Jewish parents in New Haven, Connecticut, young Alfred was a musical prodigy, and was giving piano concerts at the age of seven. The money he earned from his recitals funded his continued musical education in New York, where he was taught composition and harmony. His first work was accompanying Grace La Rue in her vaudeville act, which in turn led to further work at the Harlem Opera House and on Broadway.

It was while conducting Gershwin musicals such as Treasure Girl and Funny Face on Broadway in the 1920s that he first encountered movie mogul Samuel Goldwyn, who lured him to Hollywood. He scored his first major movie, Street Scene, in 1931, and quickly became the "premier" composer working in film at that time. He was appointed Head of Music at Twentieth Century Fox, and remained there for nearly two decades, during which time he contributed an enormous amount to film music as a composer, arranger, musical director and conductor.

Newman's career encompassed over 250 films, in every conceivable genre, earning him an astonishing 45 Oscar nominations, winning nine times. He composed the fanfare for the 20th Century Fox Vanity Plate, which is still in use today. He also is credited as "discovering" a number of composers, including David Raksin, Bernard Herrmann and John Williams, whose first screen assignments were as a result of his association. Newman retired from scoring immediately after "Airport" was finished, and looked to have a long and happy retirement.

He died aged 69 on February 17, 1970 at his home in Hollywood, of complications from emphysema.

Not to be confused with Alfred E. Neuman. Check out how awesome this family is.