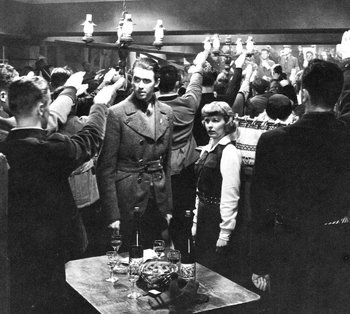 They were much happier in The Shop Around the Corner.
Advertisement:

It is about the rise of Nazi Germany and how it destroyed one Jewish family. It opens in 1933 in the German Alps, in a town right by the Austrian border, on the day Adolf Hitler came to power. That day, January 30, 1933, also happens to be the 60th birthday of Professor Viktor Roth (Morgan). Roth is a Jew married to a Gentile, Amelie. They have a daughter, Freya (Sullavan), and Amelie has two sons, Erich and Otto, by her first marriage. Despite having a Jewish stepfather, Erich and Otto (Otto is played by a young Robert Stack) are both supporters of the Nazi Party. Similarly Freya, despite being partially Jewish, is engaged to a Nazi supporter, Fritz (Young).

The evilness of the Nazis leads Freya to break up with Fritz and get together with her other suitor, anti-Nazi Martin (Stewart). Nazi persecution of the Jews soon costs Viktor his job and then puts him in prison. Eventually, Martin and Freya realize they must flee Hitler's Germany.

1940 was the year that Hollywood finally started making anti-Nazi movies, with this film being released around the same time as Charlie Chaplin's The Great Dictator and You Nazty Spy! by the pioneers of anti-Nazi activism, The Three Stooges. MGM pulled its punches a little bit by rarely using the word "Germany" and not using the word "Jew" at all, only describing Viktor and Freya as "non-Aryan". It didn't work, as Adolf Hitler proceeded to ban all MGM films in Germany anyway.