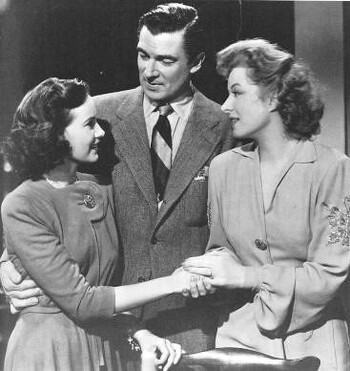 "This is the people's war. It is our war. We are the fighters. Fight it, then! Fight it with all that is in us, and may God defend the Right."
Advertisement:

The film follows the upper-middle-class Miniver family, who live in a village outside London. The Minivers have a typical English family's typical issues — such as their eldest son, Vin, wanting to marry Carol (Wright), the granddaughter of Lady Beldon — but Britain's entry into World War II soon gives them bigger things to worry about. Vin joins the RAF, mother Kay (Garson) mans the home front, and father Clem (Pidgeon) takes the family sailboat out one night at the end of May 1940 to a place called Dunkirk.

The film was considered a powerful weapon in the wartime propaganda campaign against the German Reich, as well as an outstanding artistic achievement, being nominated for twelve Academy Awards and winning six, including Best Picture, Best Director (Wyler), Best Actress (Garson), Best Supporting Actress (Wright), and Best Cinematography (Joseph Ruttenberg).

Based on English author Jan Struther's 1939 book of the same title, which was itself adapted from a series of newspaper columns featuring the eponymous character that Struther had written for The Times. A less-well-remembered sequel, The Miniver Story (1950), picked up the Minivers after the war, with Garson and Pidgeon reprising their roles.