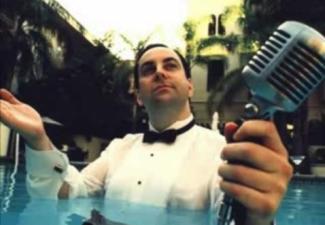 FUCK YOU, I WILL NOT DO WHAT YOU TELL ME!
Advertisement:

He sings seemingly straight Cover Versions of Rock & Roll and Hip-Hop songs in the style of a Lounge Lizard, backed by his band Lounge Against the Machine.

He's become increasingly notable in the 2010s and 2020s for his appearances in The LEGO Batman Movie, Barb and Star Go to Vista Del Mar, and the films of Zack Snyder.

Tropes associated with Richard Cheese include: