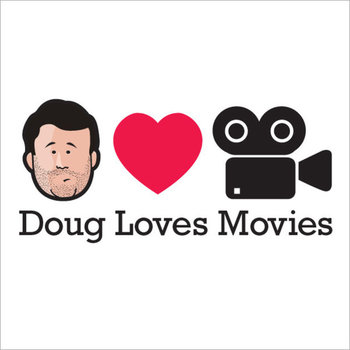 He really does.
Doug hates...
Candy wrappers, screaming babies, sticky seats with
Fifteen ads and popcorn kernels in his teeth
There's still not one that he won't see
'cause Doug Loves Movies!
—The theme song, by Hard 'n Phirm
Advertisement:

Started in 2006 with a more-or-less weekly episode schedule, Doug gathers several guests together in front of a live audience to talk about movies (obviously), play movie trivia games for a fabulous prize bag (that they fill with their own prizes), and have a good time (usually). Since the guests tend to be well-known comics or show business folk, the prizes are actually awarded to an audience member that they are playing for, selected by the guests before the games begin.

Now it's time for Doug to watch another talkie
Eyes of gold, his viewing prowess makes him cocky
There's no room in his heart for you
'cause Doug Loves Movies!