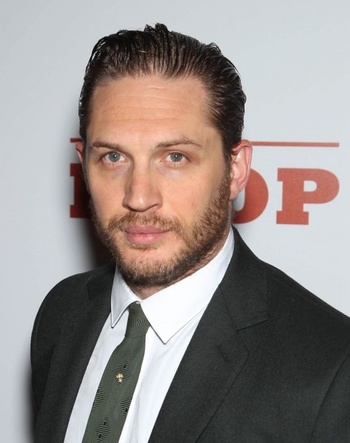 A big guy (UUUU).
"Fame and stuff like that is all very cool, but at the end of the day, we're all human beings. Although what I do is incredibly surreal and fun and amazing and I'm really grateful for it, I don't believe my own press release, do you know what I mean?"
Advertisement:

Best known as Eames in Inception, Bane in The Dark Knight Rises and "Mad" Max Rockatansky in Mad Max: Fury Road, and for radically changing his body when needed for his roles. And for some reason, taking roles where the lower half of his face is covered. He has portrayed Eddie Brock/Venom in Venom and reprised the role in Venom: Let There Be Carnage.

Hardy is married to English actress Charlotte Riley, by whom he has two children. He has a third child from a previous relationship.

Tom Hardy and his works provide examples of:

We... are Gotham's reckoning.