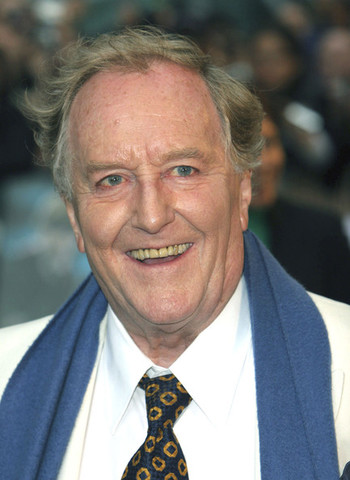 "Playing villains is half the fun, and you may not be an absolute villain yourself, but finding something in the villain, the horrid creature, that you enjoy."
Advertisement:

Timothy Sydney Robert Hardy CBE (29 October 1925 - 3 August 2017) was an English actor, best known in the UK for playing Siegfried Farnon in the All Creatures Great And Small television series for twelve years and to international audiences as Cornelius Fudge in the Harry Potter film franchise. Hardy's career lasted over fifty years, his first credit was in 1951 before he came to public prominence in a BBC adaptation of David Copperfield playing the title character. His first big screen role was the 1958 World War II thriller Torpedo Run and he never looked back, playing a large number of film and television roles. Hardy was also a prolific stage actor, well versed in Shakespeare, and his interest in medieval warfare became more than just a hobby: he wrote two well-researched books on the longbow, and became a Fellow of the Royal Society of Antiquaries.

He played Winston Churchill in the acclaimed 1981 series Winston Churchill: The Wilderness Years, and his portrayal of Churchill became an iconic one for at least a generation. Fun fact: in the 1974 TV movie The Gathering Storm, starring his good friend Richard Burton as Churchill, Hardy played German ambassador Joachim von Ribbentrop, and he also played Churchill's prep school headmaster in Young Winston, making him one of the few actors who'd both played Churchill and also played multiple characters interacting with Churchill.

Hardy became so associated with Churchill that he played him again in three more 80s dramas: War and Remembrance, an adaptation of Herman Wouk's book of the same name; The Woman He Loved, a dramatisation of the abdication of Edward VIII; and Bomber Harris, a drama about the titular head of RAF Bomber Command.

His final roles were Churchill, again, in the TV movie Churchill: 100 Days That Saved Britain, and the short film Joseph's Reel where he played a dying man given the chance to relive one day of his life.