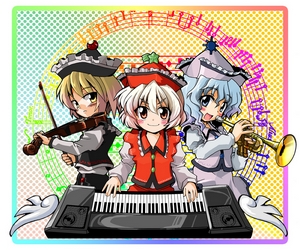 The Touhou Project really gets a lot of great pieces of music for being made up by a single guy with a synthesizer.

To put the sheer number of remix CDs in perspective, there is a torrent which weighs over one terabyte (specifically 1.8 TB or 1,817,738,246,162 bytes) of over 3000 Touhou remixes, and that only includes the ones that the (English-speaking) maintainers of the torrent have added. It would take over a decade to download over dial-up, and it's getting bigger as more remixes come around.

For the music of its sister series Seihou, go here.

...By now you've probably realized that pretty much every song ZUN has composed is on this list somewhere. Which is why Touhou is so awesome.