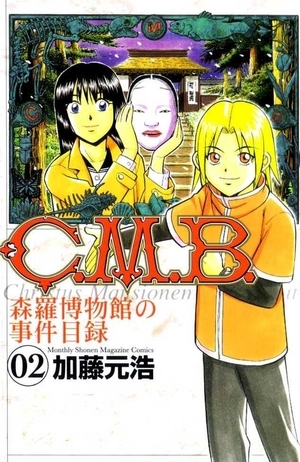 We all know that a lot of the booty of the golden age of explorations made it into museums. The British Museum in the C.M.B. story, which had custody of the recondite scientific curiosities and artefacts collected by explorer/adventurers and stored in a Wunderkammer, decided to study the dusty arcana in the 19th century. Three investigators dubbed the "Magi" were appointed to do the research, each given a ring embossed with the letters C.M.B.

Fast-forward to present-day Japan where Sakaki Shinra is the curator of a museum of oddities. He now has possession of the C.M.B. rings, indicating that he has been granted the status of guardian of knowledge like the Magi that preceded him.

Created by Motohiro Kato, creator of Q.E.D., C.M.B is about Teen Genius Shinra Sakaki solving cases mostly revolving on history, archeological work, and his relationship with his newfound classmates. Like his cousin Touma in Q.E.D, he is often accompanied with an Action Girl, Nanase Tatsuki, who helped him get into a normal school.

The series ended its publication in August 6th 2020 after running since October 2005, with 45 volumes released.