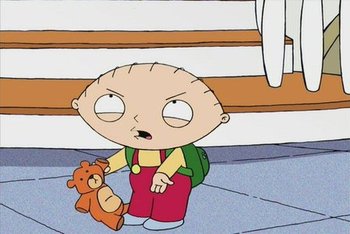 "Thank you. When the world is mine, your death shall be quick and painless."

A perpetual one year old with a lust for world domination, and the matricide of Lois. He used to be a vicious criminal in season 1-6, but has become a much nicer character in the later seasons, with the exception of still being a trash-talking, unfiltered wisecracker.

Voiced by Seth MacFarlane, who claims that his accent and mannerisms are based off of actor Rex Harrison.

open/close all folders
Tropes # to C
Tropes D to G