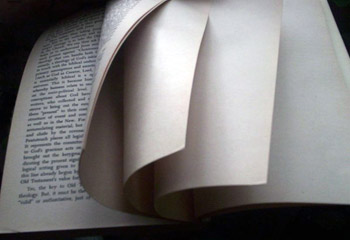 This is when a character picks up a book and sees it is essentially empty. It's just a cover (possibly even without a title) pasted onto a blank book, or one filled with nonsense words like Lorem Ipsum over and over, or that just simply stops partway through. Why is this book blank? There's a few less than good reasons for it.

It may be that the character is trapped in a Lotus-Eater Machine of some kind and the book being empty or filled with nonsense is a sign that something isn't right, since a Master of Illusion would have to manually "write" each and every book themself.

It's also possible that the character is in some kind of stage filled with prop books, or the book is a deliberate fake intended to deceive.

Someone (or thing) may have "stolen" the contents of the book and left it completely wordless in the process. In fact, some words may literally fly off the page or drip off as wet ink. Alternatively, the contents might technically exist but rendered invisible outside of the specific conditions required to read it.

Lastly, the book being blank could be an Aesop for knowledge or lack of it. Perhaps the famed book of wisdom is blank because the person finding the book is supposed to write out the important knowledge themself because having gone through the quest to find the book, they now have the wisdom to write the book of wisdom themself. A case of All That Glitters. Or if the book was a blank holy text, it shows that character is denied the knowledge that will save their soul because they are now beyond redemption.

This trope is for in-universe cases only. If a character quickly flips through the book to find the only page that matters, but closely examining the sequence shows that other pages are blank or gibberish, that's simply the creators cutting costs on unimportant details; if those pages actually contain unique material, that's Freeze-Frame Bonus.

Ezra learns that he is a fictional character and the books he's written are blank.

Ezra learns that he is a fictional character and the books he's written are blank.