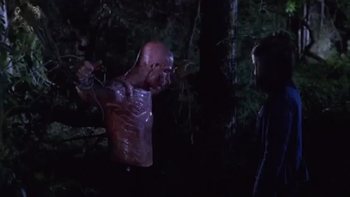 When a psychotic misogynist takes away a witch's soulmate, he deserves everything he gets. Case in point...
Xander: You said it yourself, Will, the magic's too strong. There's no coming back from it.
Willow: I'm not coming back.
Advertisement:

An ambulance arrives at the Summers house and Xander leads them to Buffy’s still body. Meanwhile, upstairs, a tearful Willow begs for Tara to return to her and calls upon Osiris to bring Tara back to life. The god denies Willow’s request, explaining that the death was natural and human and cannot be undone. The resurrection of Buffy was allowed because her death was the result of mystical forces, but Tara’s was a human death, by human means. Devastated and angry, Willow banishes the god with a violent, powerful scream, causing him pain before dismissing him. Xander accompanies the paramedics to their truck out front as a determined Willow exits the house. He tells her Warren shot Buffy, and she leaves on a mission (without revealing what happened to Tara), while Xander joins Buffy in the ambulance.

At the police station, Andrew and Jonathan talk about the fact that they’re in jail and debate about whether Warren will be rescuing them. Elsewhere, Warren buys a round of drinks at a demon bar boasting that he’s just killed the Slayer, getting him full attention. He discovers that none of the patrons knew about the Trio and, after being asked for details, brags that after sending magic and demons after her he discovered getting rid of Buffy just required shooting her in her backyard. Everyone starts to laugh, but Warren quickly finds that they’re laughing at him and not with him. Then it turns out that the news has just reported on a girl that was shot in her backyard but survived. Warren’s smugness quickly drains away as the vampire and bartender remind him that Slayers heal fast. Once she’s out of the hospital, Buffy will hunt him down.

Willow barges into the Magic Box and heads directly for the black arts books, shorting out the lights as she moves. Anya, knowing what’s happened thanks to her vengeance demon senses, tries to stop her, but Willow magically stops her from moving. Willow pulls the books off the shelves, sticks her hands into the pages and sucks the words into her body. Her eyes and hair turn black as she completely consumes the darkness. Dawn returns home from school to an empty house and walks into Willow’s bedroom, finding Tara’s dead body lying on the floor.

Warren visits Rack’s place (shown the way by one of Rack’s "regulars" for $20), demanding protection from the Slayer. Rack warns him that his biggest concern lies not with Buffy but with Willow. Warren is confused as to why Willow would be after him more, but Rack explains that while Buffy is alive another is ’stone cold’. Warren is now terrified and gives Rack all of his money while promising more. Rack agrees to give Warren some powers to help him combat Willow, leaving him with the warning that, as powerful as Willow is, there’s no guarantee that the protection spells will work as Willow is running on pure fury.

At a hospital, doctors and nurses struggle to keep Buffy alive but soon their job is taken over as Willow, now wearing dark clothing, enters the room and orders everyone else out. Xander watches as Willow approaches Buffy’s body, which has flat lined, and raises the bullet from Buffy’s chest, thereby healing the wound. Buffy wakes up, restored, and asks what happened. Willow welcomes Buffy back and calmly tells them that they must hurry to get to Warren.

Xander follows Willow’s directions as he drives down a deserted desert road and Buffy tries to reason with Willow about her choice to go after Warren, and that Willow’s using magic again. Willow snaps at Buffy by informing her that if she didn’t use magic back at the hospital to heal her, Buffy would be dead right now. Buffy admits that this is true, but she and Xander then remind Willow that she promised them she wouldn’t use magic again and try and talk her out of the pursuit. Rushed, Willow takes control of the car and leads it to another road where an overland bus is approaching. She uses magic to take control of the bus and once it is stopped, she orders Warren off the bus. He barely manages to beg for forgiveness before she wraps her hand around his throat and starts to strangle him. Willow is only angered more when she finds that she was tricked and it was actually a Warren robot. Willow finally tells Buffy and Xander about Tara’s death, that Warren accidentally shot her when he was shooting at Buffy. Buffy and Xander are devastated, but still plead with Willow not to kill Warren, because it’s wrong and it will take her to a dark place from which she might never return. Willow ignores her warnings and knocks both Buffy and Xander to the ground. By the time they get back up, Willow has vanished into thin air.

Buffy and Xander return to the house that evening and find Dawn crying and huddled in the corner of Willow’s bedroom, staring at Tara’s dead body. Buffy tries to comfort her sister, with no-one really able to grasp the situation.

The coroner takes Tara’s dead body away and Xander sees them out. When Xander and Buffy begin to talk about Willow, an angry Dawn jumps in with her view that Warren should be killed, and Xander quickly sides with Dawn, telling Buffy that Warren is "just as bad as any vampire you’ve sent to dustville". Buffy is clearly disturbed by this and doesn’t think it’s acceptable for Warren to be killed just because he killed Tara. The way Buffy sees it, Warren is just a normal human and that it’s wrong for a Slayer or anyone to kill a human regardless of the bad deeds he’s done, even though she knows that the justice system does not always work. Concerned for her friend, Buffy wants this crisis to end without Willow destroying herself, and promises them that Warren will get what he deserves. Though they still stick to their views that Warren is too evil to live, Xander and Dawn agree with Buffy that they must find Willow and bring her home. Buffy refuses to allow Dawn to tag along, and Dawn asks to stay with Spike. Xander immediately gets upset by Buffy’s willingness to let that happen and reminds her of Spike’s attempted rape the night before, but she’s confident Spike can’t hurt Dawn and he is their only option. In Tara’s dorm room, Willow uses her shirt, splattered with Tara’s blood, and magic to create a map to guide the way to Warren.

Buffy and Dawn show up at Spike’s crypt, but find Clem staying there instead who tells them that Spike left town late last night. Neither Buffy or Dawn know how to react to this news. Since Spike is gone, Buffy asks Clem if Dawn can stay with him for a while and he’s more than happy to have the company. As she leaves, Buffy asks about Spike and his whereabouts and if he will be returning, but Clem can only tell her that he’ll be gone for a while. Across the world, in a remote part of Africa, Spike enters a cave, despite warnings from one of the tribesmen. Inside the cave, Spike greets a demon in the shadows, wanting a change. The demon assumes that Spike wants to return to his former self, and he doesn’t think Spike has what it takes to earn that. Spike is confident that he will earn it, and he demands what he came for if he succeeds.

Back in Sunnydale, Xander talks to Anya as she recovers from Willow’s magic. She feels Willow’s cry for vengeance and Xander discovers that she’s returned to being a vengeance demon. Buffy soon arrives, and she and Xander question Anya about where her loyalties are. Anya tells them that she’s willing to help them find Willow, but only for Willow’s sake and not out of any loyalty to Xander or the Scooby Gang.

Trees part as Willow walks through the woods, hot on Warren’s trail. As she reaches a small clearing, Warren sneaks up on her and plunges an axe deep into her back. She revives almost immediately, her powers much too strong to be hampered by an axe. Running off again, Warren uses some of the protection spells he purchased from Rack, but, as Rack predicted, none of them are effective.

As the now-captive Warren rambles and promises that he’s going to escape from justice and will then return for revenge, Willow realizes from his posture and tone of voice that Tara wasn’t Warren’s first kill, and brings forth the spectre of Warren’s dead ex-girlfriend, Katrina, which taunts him with comments about how she should have killed him a long time ago. When Warren gets angry, Willow makes Katrina vanish, thus confirming to her that Warren truly hates women, believing them all to be manipulative. She also finds out that his murder of Katrina was because he wanted power over her. All the while, Anya leads the way for Buffy and Xander to reach Willow.

Willow decides Warren needs to feel what Tara felt when he shot her, multiplied, actually gleefully torturing him. She produces the bullet that she extracted from Buffy at the hospital, and magically penetrates it into Warren’s chest in slow-motion. He begs for mercy as she describes the damage of the bullet and what it did to Tara, and when he continues to interrupt her, Willow magically sews his lips shut so she can continue. She questions why someone like him gets to live when someone wonderful like Tara has to die. When he’s free to speak again, Warren apologizes profusely and tries to convince Willow that she’s better than this. As Buffy, Anya and Xander arrive at the clearing, an unimpressed Willow says "Bored now," and in a moment both glorious and horrifying, Willow need only wave her hand to rip the flesh clean off Warren's entire body, the sudden shock of the act plus exposed muscle and tissue killing him instantly. She then magically engulfs his dead body in flames and it disintegrates. Buffy, Xander, and even Anya look on in horrified shock at this summary execution as a satisfied Willow proclaims, "One down," before disappearing into thin air.