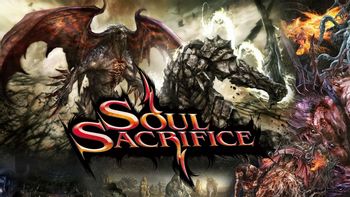 Soul Sacrifice is a video game developed by Marvelous AQL and Japan Studio for the PlayStation Vita. The concept was created by Keiji Inafune, best known for being the co-designer for the Mega Man franchise.

Soul Sacrifice is played in the third-person perspective. The player character is a slave that serves a powerful and cruel sorcerer. Just before the protagonist is going to be sacrificed, a demon in the form of a book appears before him. The book is a collection of stories that describe past fights between monsters and the powerful sorcerer. The player character is able to enter the book's world and experience the fights, thereby gaining experience and power. One particularly notable mechanic is the ability to sacrifice parts of the character's body or items to create devastating attacks. These sacrifices will be permanently marked on the player character's body, meaning that unless a slow-regaining resource is spent, they are not an infinite resource that can be tapped into.

A combination sequel-Updated Re-release, Soul Sacrifice Delta, released in Japan on March 6, 2014, and in the US and EU on the PlayStation Network on May 13 and 14 of 2014, respectively. Boasting receive overhauled graphics, systems, and AI, Delta also includes a number of new spells, more areas, monsters, and archfiends based on the Grimm Fairy Tales. Players will be able to choose between the two old factions and the third new one: Avalon, Knight Templars who seek to destroy all monsters, no exceptions; Sanctuarium, a splinter group of sorcerers who believe that monsters can and should be saved; and the new faction the Order of Grim, a cult started by a sorcerer who noticed the Eternal Recurrence of the Twin Gods' feud and whose followers bring hope to both sorcerers and non-sorcerers alike, in hope of somehow ending the vicious cycle. Which organization the player chooses to join will change what mission rewards and types of magic they can gain.

A character sheet is under construction HERE.