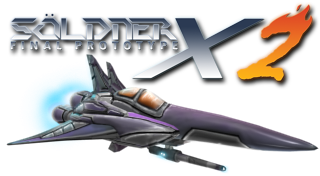 Söldner-X is a series of two downloadable horizontal-scrolling Shoot Em Ups for the PlayStation 3. With the first game also on PC, and the second game now also on the Play Station Vita. Developed by SideQuest Studios and published by eastasiasoft.

In Söldner-X: Himmelsstürmer, humanity has been nearly overrun by a mysterious corruption that transforms all technology and organic material it comes into contact with. Their last hope is a lone mercenary issued with the Söldner-X prototype ship.

Set twenty years later, Söldner-X2: Final Prototype stars a new pilot fighting against the D'aarg empire, who threaten to conquer humanity with technology adapted from The Virus of the previous game. The game gives your pilot a choice of two new ships, plus the Söldner-X prototype as an unlockable third ship.