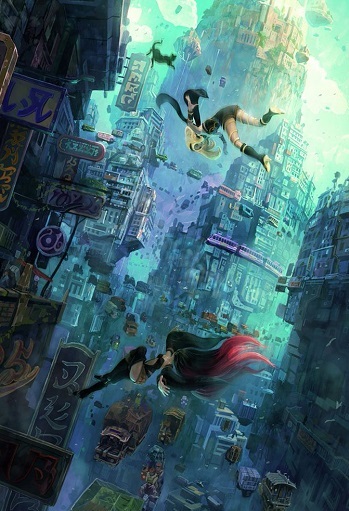 Gravity Rush 2 (Gravity Daze 2 in Japan) is an Action RPG Wide-Open Sandbox video game and sequel to the critically-acclaimed Killer App Gravity Rush developed by SIE Japan Studio and Project Siren and published by Sony Interactive Entertainment for the PlayStation 4. It was set to released on December 2, 2016, but due to some anticipated triple-A games set to be released at that time, it was officially released on January 18-20, 2017 instead.

The game continues the story of Kat, the cheerfully amnesiac gravity-shifting heroine from the first game, in a new city with a very distinct and different culture, after being stranded in a nomad settlement due to being caught up in the pull of a massive gravity storm. Joining her for her adventures are Syd, her underachieving police friend, and Raven, the rival shifter from the first game, now a close ally, as well as a cast of new characters from this unexplored sky. As she searches for a way back home to Hekseville, she meanwhile has to deal with threats to the peaceful lives of her friends, both from the Nevi, which ever assail the lives of everyone, and from the corruption that mires the ruling class of the city of Jirga Para Lhao. It also features the answers to several mysteries that remained unsolved in the first game, most prominently being the true identity of just who Kat is and what her role is in the grand scheme of things.

This game displays examples of:

Tenebria of the Darkness

The Keeper of Darkness. Like her name implies, she has command over the element of darkness.

Example of:
Casting a Shadow

Tenebria of the Darkness

The Keeper of Darkness. Like her name implies, she has command over the element of darkness.