Referenced By / The Smurfs 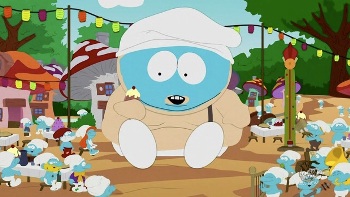 The Smurfs have been a mainstay of popular culture since their creation in 1958. Originally a Belgian comic strip, The Smurfs by Peyo, it quickly became a Cash Cow Franchise in the following decades, culminating in the 1965 animated film Les Aventures des Schtroumpfs, the 1976 animated feature The Smurfs and the Magic Flute and Dutch singer Vader Abraham (Father Abraham)'s 1977 hit single The Smurf Song, which was a top 5 hit in many countries and was translated by him in many other languages, including Japanese. After Hanna-Barbera turned the series into a Saturday-morning children's TV cartoon series, The Smurfs, in 1981, the Smurfs became a global phenomenon in all other parts of the world too, including the USA. In the 2000s, the CGI live-action Smurfs films revived interest in the franchise.

Naturally, this has led to countless shout-outs, references, spoofs, homages and other winks to the franchise.