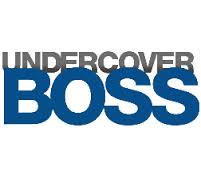 No one knows s/he's the boss!
Advertisement:

Undercover Boss (2010-present) is a primetime Reality Show on CBS that follows the top-ranking officials of major American companies and corporations as they go undercover to learn more about the challenges facing their businesses, and meet employees who help them gain a new perspective on working life.

Each episode features a high-ranking executive or the owner of a corporation going undercover as an entry-level employee in their own company. The executives alter their appearance and assume an alias and fictional back-story in order to blend in. The fictitious explanation given for the accompanying camera crew is that the executives are being filmed as part of a documentary about entry-level workers in a particular industry (in the second season, the employees are told the filming is for a contest). They spend approximately one week undercover, working in various areas of their company operations, with a different job and in most cases a different location each day. They are exposed to a series of predicaments with amusing results, and invariably spend time getting to know the people who work in the company, learning about their professional and personal challenges.

At the end of their week undercover, the executives return to their true identity and request the employees they worked with individually to corporate headquarters. The bosses reveals their identity, and reward hard-working employees through campaign, promotion, or financial rewards, while other employees are given training or better working conditions.

These tropes were discovered by the undercover boss: