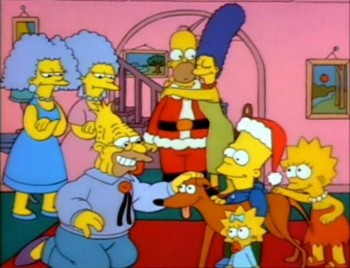 Marge: Isn't Bart sweet, Homer? He sings like an angel.
Bart: (close up) Oh, Jingle bells, Batman smells, Robin laid an egg. The Batmobile broke its wheel, and the Joker got awa- (cut off by Skinner pulling him off stage)
Advertisement:

"Simpsons Roasting on an Open Fire" (production code 7G08), also known as "The Simpsons Christmas Special", was the first full-length episode of The Simpsons to be aired, and the only one to air in The '80s, although it was originally produced as the eighth episode.

After going to the Springfield Elementary School Christmas pageant, Marge asks Lisa and Bart for their letters to Santa. Lisa wishes for a pony, while Bart instead wants a tattoo. When Marge, Lisa and Bart go shopping the next day, Bart slips away to the tattoo parlor and gets a tattoo that reads "mother". Counting on Homer's Christmas bonus, Marge spends the Christmas money getting the tattoo removed. However, at the Power Plant Mr. Burns announces that there will be no Christmas bonus for this year.

When Homer discovers that Marge has spent the Christmas money on removing Bart's tattoo, he decides not to worry the family by making them think that there might be no presents for the year, and so starts working as a Mall Santa. On Christmas Eve, Bart goes to the mall deciding to harass the fake Santa. When he pulls off the beard he discovers that the Santa is actually Homer.

Homer is paid less than he expected at the end of the day, and is convinced to go to the racing dog tracks. He bets all his money on a last-minute entry called Santa's Little Helper, who then loses. As they leave the track, Homer and Bart see the dog's owner abandon him for losing the race. Bart asks Homer if they can keep the dog as a pet, and Homer reluctantly allows him to. When Homer comes home, thinking he'll have to come clean, the family think that Santa's Little Helper is meant to be a present for the whole family and all is forgiven.