Western Animation / The Smurfs and the Magic Flute 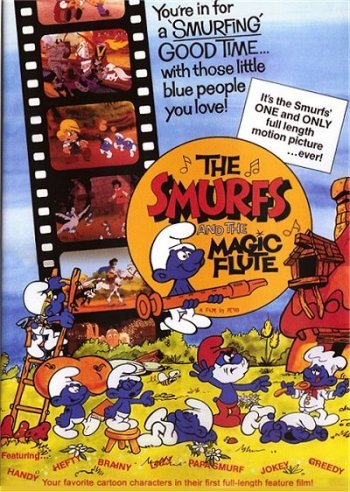 The ONE and ONLY full-length motion picture until 2011, anyway...
Advertisement:

The Smurfs and the Magic Flute (original French title La Flûte à six schtroumpfs) is a 1976 animated film by Belvision Studios based on the original 1958 comic book story La Flûte à six trous ("The Flute with Six Holes") from the Johan and Peewit comic book series by Peyo. It features the story of a young court entertainer named Peewit who came across a magic flute that made people dance when they listen to its tune, though extended playing would cause them to pass out. Eventually it was stolen by a thief who wanted to use it for robbing people of their valuables. Peewit and his friend Johan seek out the help of The Smurfs, the creators of the magic flute, in order to find a way to get the flute back.

The Smurfs and the Magic Flute provides examples of the following tropes: