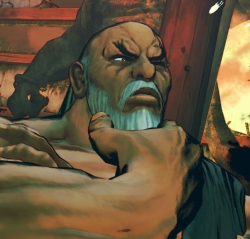 "What is the airspeed velocity of an unladen swallow?"
"When I stroke the beard thusly, do I not appear more... intellectual?"
— Lt. Commander Data while trying on a fake beard, Star Trek: The Next Generation
Advertisement:

This is the need for either Old Masters or Wicked Cultured villains to stroke their beard as a compulsion. Evil types usually do this while preparing their Evil Plans, sipping A Glass of Chianti, and indulging in Villainous Slouching. This version is somewhat discredited today.

These people don't necessarily need an actual beard, as even placing their hand on their chin where a beard would be while in thought can suffice.

This trait has several faces; the meticulous planning and deep thought this trope usually suggests tends to be associated with evil. The good type usually suggests a zen-like peacefulness. Some also liken it to shrinks stroking their Freud-like beards. The overarching theme with this trope is intellectualism (or at least sneakiness).

Not to be confused with stroking someone's else's beard (which is typically a flirtatious or possessive gesture).

Compare Putting On My Thinking Cap.

The Kahuna lampshades it.

The Kahuna lampshades it.