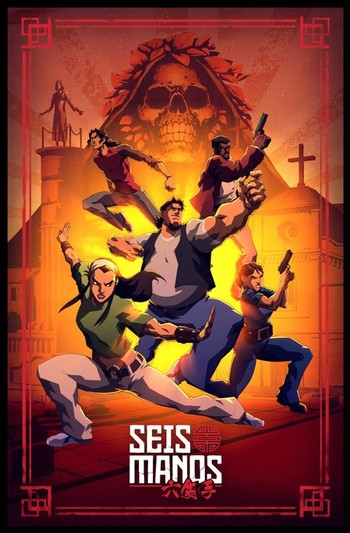 Seis Manos is a 2019 Netflix martial arts animated series created by Brad Graeber and Álvaro Rodríguez released on October 3, 2019. The series is directed by Willis Bulliner and includes Dan Dominguez as co-writer. Seis Manos is the first original animated series produced by VIZ Media as well as the first original property of Powerhouse Animation Studios (the studio behind the Castlevania (2017) animated series), being created and developed completely in-house with animation assistance from Dr Movie.
Advertisement:

Set in the fictional Mexican town of San Simon, Seis Manos follows three orphans, raised in the forms and philosophies of the Chinese martial arts, who set out on a path of bloody revenge and justice after the death of their mentor. Meanwhile the San Simon police and the DEA are trying to take down a drug lord, and find themselves on the same trail as the Seis Manos.

The series takes many cues from 70s cinema, including blaxploitation cinema and grindhouse films.