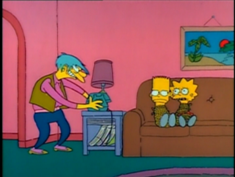 After Homer hears Marge call a radio psychology show about how she feels unappreciated by her husband, Homer decides to make it up to her by taking her out on a romantic evening at a roadside hotel. The trouble comes when Homer hires a babysitter for the kids whose last jobs were a prisoner of Springfield Pentitentary and a "guest appearance" on Springfield's Most Wanted as a wanted fugitive.

This episode is notable for being the very first episode of the post-Tracey Ullman incarnation of The Simpsons to be produced, and was intended to be the show's pilot; however, it ended up being the last one in its season to be aired. This was because there was heavy miscommunication between the executive producers and the animation studio over what animation style the show should take; Groening preferred a quasi-realistic style while Klasky-Csupo wanted something more cartoony. AKOM, the overseas studio, was caught up in this conflict, likely getting conflicting directions from stateside, and naturally sent back an inconsistent mess (a sampling of problems include fluctuating character designs, sparse backgrounds with continuity issues, turning the saccharine "Happy Little Elves" into a violent Subverted Kids' Show, and an overall rubbery style that was not what Groening was going for). As a result, the show's premiere was delayed from a fall 1989 premiere to a winter one and the season was heavily reorganized to give the producers time to revise this episode's animation, a task so daunting at the time (given that 70% of it needed to be redone from the ground up) that even after it was placed at the end of the season, it wasn't completed until the last minute. Quite a way to start off one of the biggest juggernauts in western animation, huh?