Recap / The Simpsons S1 E9 "Life on the Fast Lane" 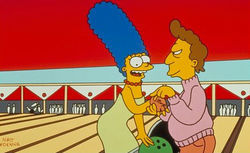 It's Marge's birthday and Homer gets her a present: a bowling ball, for which Marge initially has no use. To spite him, she takes lessons — and encounters a suave French bowler (voiced by Albert Brooks) who wants to have sex with her.