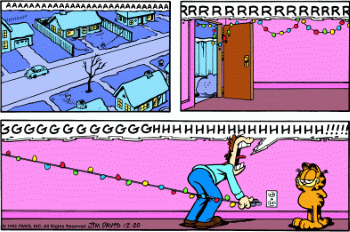 For want of an extension cord, Jon's voice was lost.
"In the meantime, though, we're going to skip straight to the theme song, so I can scream for a full minute. [deep breath]
AAAAAAAAAAAAAAAAAAAAAAAAAAAAAA—"
— Linkara, Atop the Fourth Wall, "Fist of the North Star, Ch. 1"

A character freaks out about something, and screams. And screams. And screams, to the point where it becomes hilarious. (Although, sometimes it goes even longer than that.) Sometimes, the character takes a deep breath to continue screaming, and even comments something like "Why do they make buildings this tall? Everyone knows you should be able to fall to your death in the same scream!"

This is almost always intentionally Played for Laughs; unintentionally hilarious long screams qualify as Narm. May result in an Inopportune Voice Cracking if the tone can't be sustained.

May overlap with The Scream, Big "NO!", Heroic BSoD or Faux Horrific. Reactive Continuous Scream is a subtrope.

Richard finds out that he has to get a job.

Richard finds out that he has to get a job.