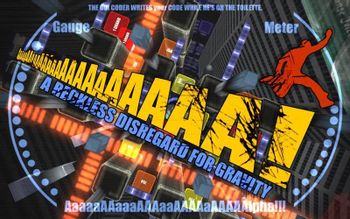 AaaaaAAaaaAAAaaAAAAaAAAAA!!! - A Reckless Disregard for Gravity, abbreviated as AaAaAA!!!, is an indie game from Dejobaan Games, released in September of 2009.

Enter an Alternate History version of Boston, Massachusetts in the year 2011. In 1982, weird floating mountains and buildings descended from space and people now live in them. The player takes the role of a daredevil who BASE jumps off of these floating objects.

Gameplay consists of freefalling in First-Person view from the top of the level to the bottom, getting close to as many buildings or solid objects as possible on the way down. Each object you near earns you a "kiss". Staying near an object earns you "hugs." You can smash through colored scoring plates and smack into birds. After acquiring the relevant upgrades, you can give a thumbs-up to supporters, flip off protesters, use Caffeine Bullet Time and spraypaint graffiti onto the sides of municipal structures. Oh, and you need to use a wingsuit to land safely, otherwise... splat.

All of the above actions earn you points which lead to star ratings, which get you teeth, which allow you to unlock other levels in the game as well as some tutorial videos and slightly weirder things like a meditation exercise to help you relax- and another to do just the opposite. The game overall has a very tongue-in-cheek presentation, with tutorial levels having a tape-rewinding sound at the end, lengthy level and achievement names, and humorous descriptions for said levels. The game even keeps track of bones broken, namely all of them if you crash land.

A sequel, AaaaaAAaaaAAAaaAAAAaAAAAA!!! - For the Awesome, was released in 2011. It contains 43 new levels, plus all the levels of the first game, along with introducing new mechanics such as invulnerability plates.

"A Reckless Disregard For Tropes":