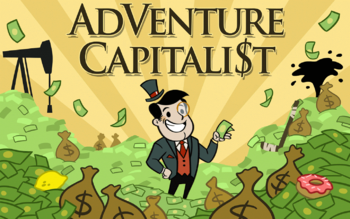 AdVenture Capitalist is an Idle Game by Hyper Hippo Games

You start with a lemonade stand. Click it to earn one dollar per sale. Buy more lemonade stands with the proceeds. Expand into newspapers, pizza delivery and all the way up to becoming an oil baron. Hire managers to automate your facilities and upgrades such as sports pages, online ordering and combustible lemons. In addition, you can reset the game to attract angel investors that multiply your investments' profits even further.

The net effect of all the upgrading and multiplying is an Arbitrarily Large Bank Account in the millions, billions, undecillions, octovigintillions... the sky's the limit. Did we mention the game is a great way to learn the proper names of really huge numbers?

The author originally intended AdVenture Capitalist as a quick "practice" game to learn Unity programming, but it unexpectedly exploded in popularity, and has received multiple updates keeping it fresh.

It is available for free on Steam

and mobile devices. The game used to be available as a web app, but it has since been made unplayable.

A sequel, AdVenture Communist was made in 2016 for both Steam and mobile devices, and it differs in gameplay by being resource-oriented with higher tier buildings that produce lower-tier ones.