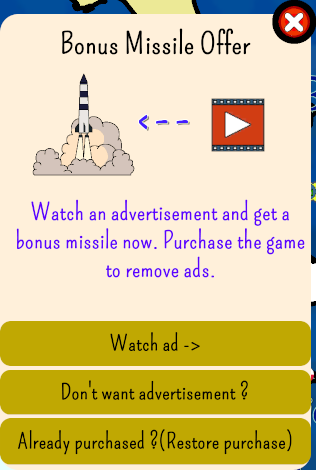 Nuke a country you hate for just one ad!
Advertisement:

Nobody likes seeing, much less watching, ads; but if watching a short, 15-30 seconds advertising clip grants them some precious Video Game booty, many people are probably more than happy to click that "Play" button. Filling out surveys have the same effect.

Let's face it — producing a game can be an expensive enterprise: you need capital to buy a good game engine and development software, and hire a team of programmers, script writers, concept artists, animators, etc. to make sure that the final product runs smoothly. Unfortunately, not a lot of people are willing to pay money for the game you've spent so much to make, especially if you're a new indie developer with an unknown track record of quality.

So what to do?

One way to monetize a game while attracting a broader player base is to release the product as free-to-play but promote in-app purchases to buy subscriptions to access premium content, obtain better equipment and/or characters, and other add-ons.

However, this doesn't guarantee that the players will spend money on your product, and ramping up the game's difficulty so that it's impossible to make significant progress without purchasing in-game items are more likely to drive away customers, and probably prompt them to rate the game badly for being "pay to win".

Enter the Ad Reward, in which players can watch ads or fill out surveys in lieu of real money to buy in-game currency, refill/speed up the Freemium Timer or obtain other items that can normally only be purchased with real money. This allows the game developers to earn revenue while still retaining their player base.

Of course, the ads aren't a direct substitute to cash-based transactions. These games usually put a limit on the number of ads the players can watch (e.g. once every hour) or surveys to fill out, and not all of the available premium content can be obtained by watching ads or filling out surveys—meaning that paying customers still have some advantages over the "strictly-free" players.

Note that this trope only applies when watching the ads or filling out surveys actually offers some in-game benefits, and that the ads are optional to watch or surveys to fill out at the player's digression. Games that simply display ads are not examples—although they might fit under Freemium instead, if they offer an ad-free subscription.