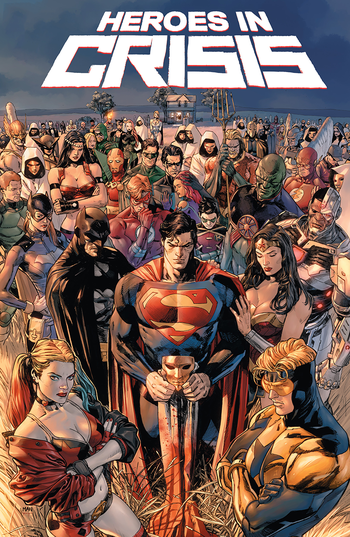 Heroes in Crisis is a 2018 Crisis Crossover published by DC Comics, written by Tom King and drawn by Clay Mann.

Catering to the high cost of trauma in the superhero community, Sanctuary was established, giving them a safe space to cope and recover from whatever's plaguing them.

But when a number of its patients are killed by an unknown assailant, it's up to Batman, Superman, and Wonder Woman to lead the murder investigation — with Harley Quinn and Booster Gold emerging as the prime suspects.

Heroes in Crisis is the latest entry in a long line of crisis crossovers with the word "crisis" in the title, but whereas most of those storylines (except Identity Crisis) were very cosmic and grandiose, this one is more existential and personal, inspired by a traumatic experience in King's life prior to the series.

The Flash (Rebirth) and Batman (Tom King) have a tie-in crossover to the event called "The Price", which features Barry Allen and Bruce Wayne's investigation into a suspect for the murders: Gotham Girl.

The miniseries received two follow-up series: Harley Quinn and Poison Ivy and Flash Forward, which both deal with the aftermath of the event.