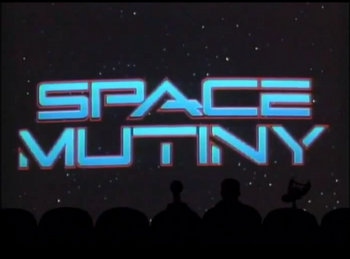 Sounds like someone owns himself a DX7 keyboard, huh?
Advertisement:

"I have never seen the show. What people do not seem to understand is that the movie was meant to be a spoof on sci-fi films."
— Cisse Cameron, aka Lea

This movie landed almost perfectly in that sweet spot for MSTing material: flawed enough to provide hours of enjoyable riffing, but not a completely unwatchable trainwreck, resulting in one of the most popular episodes. In fact, the Onion AV Club selected this episode

for their "Gateways to Geekery" feature as an ideal entry point for newcomers. Mike Nelson and the 'bots had a great time pointing out some cast members' resemblance to certain celebrities, as well as the obvious fact that the actress playing Lea is much older than her character is meant to be (they refer to her as Jansen's "Grandma-daughter").

The copious number of Railing Kills nearly becomes a Drinking Game (and inspires Tom to fill the 'Satellite of Love' with pits and railings), and they also make up numerous fake bodybuilder names for the muscular hero Dave Ryder including Slab Bulkhead, Fridge Largemeat, Bolt van der Huge, Big McLargeHuge, Blast Hardcheese, Smoke Manmuscle, Punch Rockgroin, Roll Fizzlebeef, and Bob Johnson. Kalgan's frequent maniacal laughter is also a source of entertainment, as is the beefy protagonist's oddly screechy battle shouts. Kalgan's red-armored bodyguard ("Lobster Boy") and the death and miraculous "resurrection" of Lt. Lemont round out the riff targets. Oddly enough, the only thing Mike and the Bots don't lampshade is the fact that every single "space" shot in the film is simply a clip from Battlestar Galactica. (Evidently because they didn't know this was the case at the time of filming.) They were also unaware that the film was made in South Africa during The Apartheid Era; at one point, Mike jokes that it looks like a Canadian production.

Space Mutiny was released as part of Vol. 4 of the DVD collections by Rhino Entertainment, and was re-released by its successor, Shout! Factory. It is also available through Shout! Factory TV here.