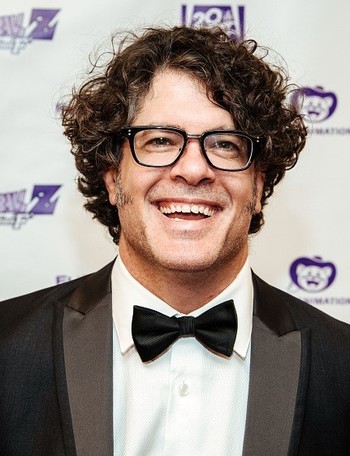 Hey! It's me, (the voice of) Goku!
Advertisement:

Sean Christian Schemmel (born November 21, 1968 in Waterloo, Iowa) started dubbing in 1999. His first (and breakout) role would be the providing the voice for Goku in Dragon Ball Z (in other words, he became the English voice of possibly the most powerful and famous Shōnen hero of all time). He originally wanted one of the villain roles, since he only saw a few episodes of the series before being cast, and NEVER knew who Goku was before walking into the recording studio! Once he saw that he was pasted on all the posters on the wall, he realized he was cast as "The Guy"! With Kai, and new video game adaptations, he is still voicing Goku to this day.

He did some other roles for Funimation before moving to New York to work for 4Kids Entertainment. Under 4Kids, he got what may be his second most famous role — Lucarionote specifically, the one with speech capabilities from the eighth movie in the Pokémon franchise and Super Smash Bros. for 3DS/Wii U, who is often compared to Goku by English-speaking fans for that very reason. He still occasionally returns to FUNimation since Kai started being dubbed and 4Kids Entertainment has since gone by the wayside.

In 2013, he moved to California and currently is doing work there as well.

He has a MAJOR vocal range; no pigeon hole there.

And when it comes to screaming, he is the undisputed master. No one screams as lengthily

. His screams are often recycled any time any other character needs to scream in the same show!

Apologies from stealing the Nobuyuki Hiyama joke from his page.
Feedback