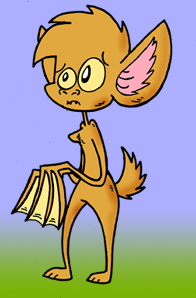 "A comic about a witch, her familiar, the devil and the hymen-repair business."
Advertisement:

is a twice-weekly satirical webcomic by Agouti-Rex. It follows the adventures of a prim and proper witch, Syrynth Sapsorrow, and her timid familiar bat, Ilemauzer, living in an undisclosed location in medieval Germany. As the comic opens, Syryth has her life turned upside down when the devil and his entourage — consisting of his crotchety grandmother and his spoiled granddaughter — crash her cottage and decide to take up permanent residence.

Oh yeah, and it's also Not Safe for Work. That said the series stopped running in 2010 with No Ending.